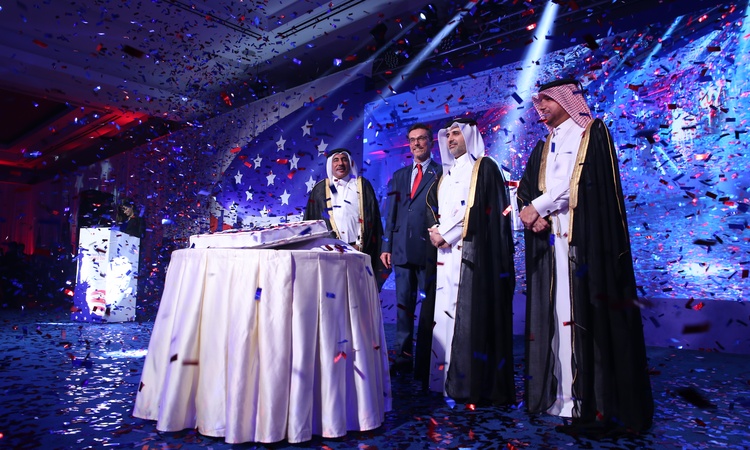 Chargé‎ d’Affaires William Grant’s speech highlighted the strength of the U.S.-Qatar partnership, and the values that propel the two countries forward, regardless of whatever challenges they may face – innovation, integrity, and an entrepreneurial mindset. “We enjoy working with Qatar because we see so many values we prize – tolerance of people with different religions and backgrounds, a constant drive to improve, and focus on the future. Both America and Qatar understand that through diversity and openness to others there is strength. There is progress. There is resilience.”

Grant noted that, after more than 45 years of friendship and partnership, the U.S. Embassy continues to build bridges between Qataris and Americans across disciplines. More than 500 Qataris have visited the United States on its world-renowned International Visitor Leadership Program, including programs this year on disaster preparedness, women in civil society, and combatting money laundering and the financing of terrorism. The Embassy’s Discover America Week in late 2018 brought more than 150 U.S. and Qatari companies together to promote trade, travel, the arts. Joint military exercises like the recent Invincible Sentry are helping enable a secure environment for World Cup 2022 and beyond.

Grant pointed to the success of the U.S.-Qatar Strategic Dialogue in Doha in which covered trade and investment, education and culture, energy cooperation, labor rights, regional security and defense cooperation, and law enforcement and counterterrorism. During the Dialogue, U.S. Secretary of State Michael Pompeo and H.E. Deputy Prime Minister and Minister of Foreign Affairs Mohammed bin Abdulrahman Al Thani signed agreements covering education, the first bilateral agreement in Cultural cooperation, and expansion and upgrades at Al-Udeid Air Base. The U.S. is the largest source of imports to Qatar as well as one of the largest investors in Qatar’s energy sector.

Grant also noted “It has been an impressive year for Qatar,” referring to accomplishments like new labor reforms to protect the millions of foreigners who live and work here, opening the spectacular new National Museum of Qatar and the exciting victory by Al Anabi in the AFC Asian Cup.